I.T. for the Terrified was the brain child of the late Angela Vivian, OBE, who had the great foresight to set up an IT training centre in Wedmore in 1999.  It was linked with Wired Wedmore, the aim of which was to bring wireless broadband to the village when BT were not prepared to provide it. 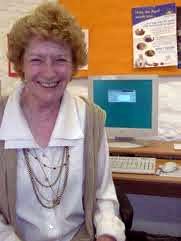 Sadly, Angela died in 2004, but she had set the organisation up on a firm base which has allowed us to go from strength to strength.

IT4TT was first located in the small shop opposite the George Hotel (now an estate agents), and there were 6 computers.  The Centre later moved to the Hayloft, above the skittle alley at the George Hotel.  Here, there was room to increase computers to 12.  There was an additional room at the far end of the Hayloft, which Angela envisaged as an Information One Stop Shop.  Around the same time, a facility was set up for young people in the village, initially in the skittle alley, soon moving upstairs, replacing the One Stop Shop.   Another 10 computers were networked; these were high configuration machines to allow the young people to play games.

In 2009, IT4TT formed a limited company gaining charitable status with an expanding team of volunteers.  At this time the Centre had the opportunity to re-locate to The Old Cowshed, a building owned by The Kings of Wessex Academy.  This has been refurbished to provide a fully accessible Training Centre, which retains the relaxed atmosphere whilst giving us a professional working environment.  You can read about this and view images of the refurbishing process here.

Our last day in The Old Cowshed, sadly, was 15th July 2016 but we were pleased to be able to use

Each month, IT4TT publishes an article in the Mendip Times under the heading of 'Internet'.  https://mendiptimes.co.uk